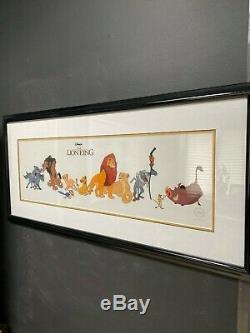 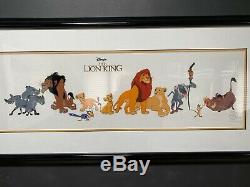 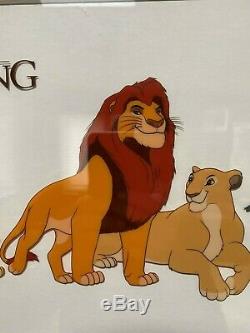 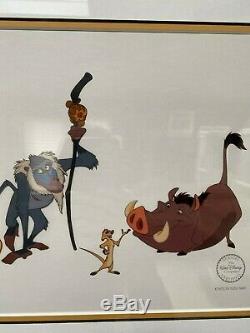 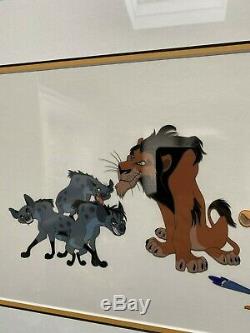 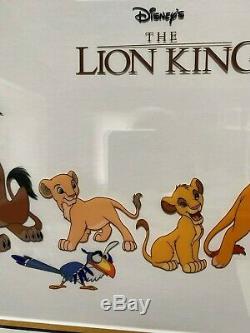 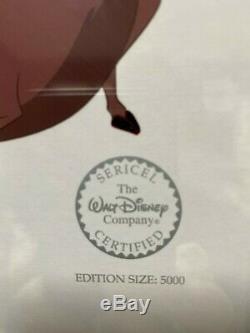 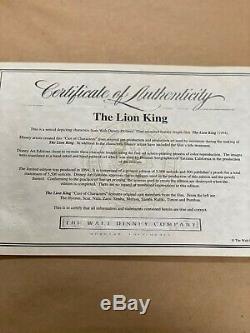 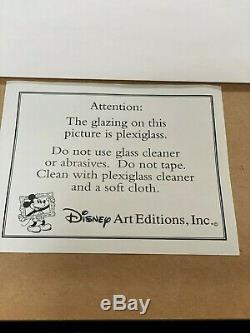 Genuine Lion King Cast of Characters limited edition animation art cel by Disney with Certificate of Authenticity. The cel, frame, COA, and price tag are in excellent original condition. This is a sericel depicting characters from Walt Disney Pictures' 32nd animated feature-length film The Lion King (1994). Disney artists created the "Cast of Characters" from original pr-production and production art used by animators during the making of The Lion King. In addition to the characters, Disney artists have included the film's title treatment. Disney Art Editions chose to recreate these character images using the fine-art screen-printing process of color reproduction.

The images were translated to a hand-inked and hand-painted cel which was use by Premier Serigraphies of Tarzana, California in the production of the sericels. The limited edition was produced in 1994. It is comprised of a general edition of 5,000 sericels and 500 publisher's proofs for a total maximum of 5,500 sericels. Disney Art Editions approves the techniques used in the production of this edition and the proofs thereof. Confirming to the practice of fine-art printing, the screens used to create the editions are destroyed when the edition is completed.

There are no signed or numbered impressions in this edition. The Lion King "Cast of Characters" features original cast members from the film. From the left are The Hyenas, Scar, Nala, Zazu, Simba, Mufasa, Saribi, Rafiki, Timon and Pumbaa. This is to certify that all information and statements contained herin are true and correct.