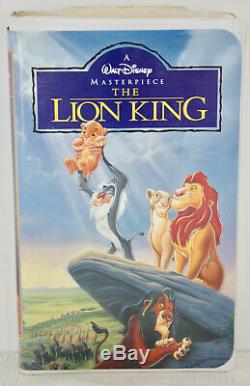 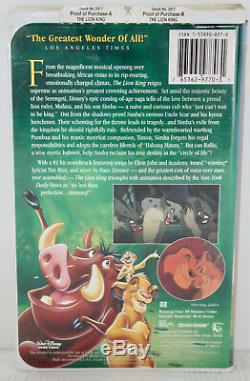 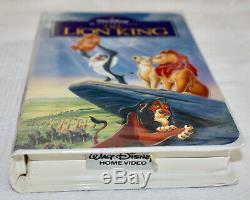 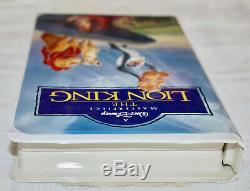 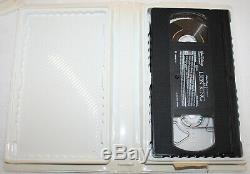 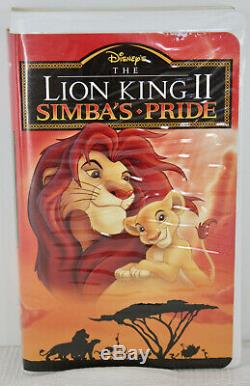 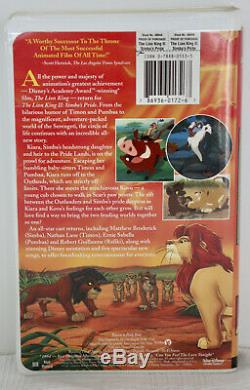 This is a rare VHS copy of the animated film The Lion King , from the coveted Masterpiece Collection, released in 1995 by Walt Disney Home Video, #2977. This item is in like new condition; SEE PICTURES FOR DETAIL.

The outer package and inner VHS are mint/near mint; SEE PICTURES FOR DETAIL. This is extremely hard to find in this like new condition.

From the breathtaking musical opening over breathtaking African vistas to its rip-roaring, emotionally charged climax, The Lion King reigns supreme as animations greatest crowning achievement. Set amid the majestic beauty of the Serengeti, Disneys epic coming-of-age saga tells of the love between a proud lion ruler, Mufasa, and his son Simbaa naïve and curious cub who just cant wait to be king.

Out from the shadows prowl Simbas envious Uncle Scar and his hyena henchmen. Their scheming for the throne leads to tragedyand Simbas exile from the kingdom he should rightfully rule. Befriended by the heartwarming warthog Pumbaa and his manic meerkat companion, Timon, Simba forgets his regal responsibilities and adopts the carefree lifestyle of Hakuna Matata. But can Rafiki, a wise mystic baboon, help Simba reclaim his true destiny in the circle of life? With a #1 hit soundtrack featuring songs by Elton John and Academy Award-winning lyricist Time Rice, and score by Hans Zimmerand the greatest cast of voice-over stars ever assembled The Lion King triumphs with animation described by the New York Daily News as no less than perfectionstunning!