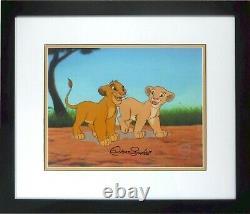 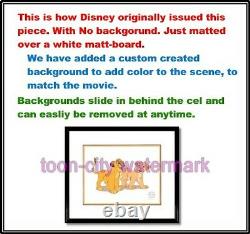 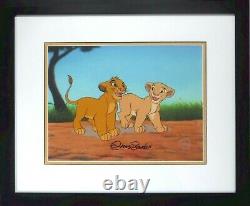 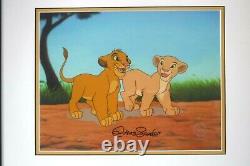 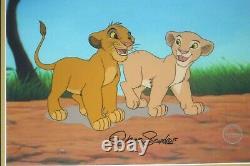 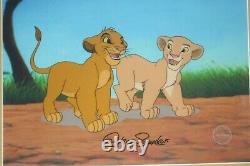 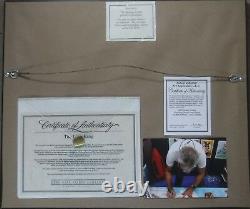 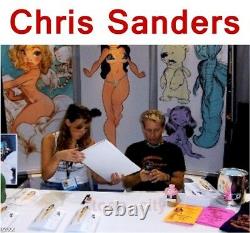 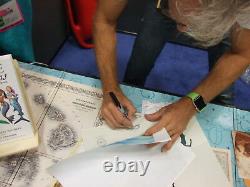 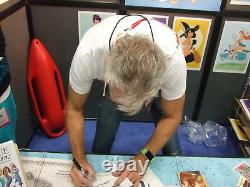 Features Simba Getting Ready to be KING as goes out on an adventure with his Childhood Playmate. Very cute piece for a boy going into a man. This piece was created in 1994 and is part of a limited edition of 5000. Cel size is 14 x 11 inches.

Comes with the Original Disney Frame. This piece is complete with the Disney Seal embossed on the cel, in the lower right corner.

It also is accompanied by the Original Disney Certificate of Authenticity. This piece is made to please as it is easily the BEST looking sericel from The Lion King. BONUS: In addition, we had the opportunity to meet Chris Sanders and have him sign cel at the 2016 San Diego Comic Con. Chris was a major animation artist on The Lion King. Comes with the original Disney Certificate of Authenticity.

Disney issued this piece without a background, so we created a background and just slid it behind the cel. Piece is a 11x14 inch photographic, luster printed image, to prevent glare. As you can see we were able to replicate the background from THIS scene in the movie.

Very Authentic to the movie. Background is NOT available separately. New Acid-free matting and New UV Plexiglass. Frame size is 21 x 18 inches. As you can see it's beautiful.

Piece is Finished off with dust paper backing and a wire hanger. Two certificates of Authenticity are mounted on the back. This piece is Ready to hang, right out of the box. Is a serigraphy process that involves silk-screening each individual color to the cel, one at a time.

Because of their larger edition size, sericels are the most affordable type of animation art, ideal for the beginning collector. The word Sericel is a contraction of Seri-graphed Cel. BIO: Christopher Sanders (born March 12, 1962) is an American film animator and voice actor best known for co-directing the Disney animated feature Lilo & Stitch, and providing the voice of Experiment 626 from Lilo & Stitch and Leroy from Disney's Leroy & Stitch.

Raised in Colorado, Chris Sanders fell in love with animation at the age of ten after seeing Ward Kimball animated shorts on'The Wonderful World of Disney'. He began drawing, and applied to CalArts after his grandmother told him about the animation program at the school. He majored in character animation, and graduated in 1984, moving on to work at Marvel Comics.

Sanders joined Walt Disney Feature Animation in 1987 as the first person hired into Feature Animations newly formed visual development department. His first project at Disney was The Rescuers Down Under, where he started as part of the visual development team before making the transition to the story department. He repeated that pattern on Beauty and the Beast, for which he storyboarded several sequences, including the Beasts death and magnificent resurrection. Following Beauty and the Beast, Sanders developed new concepts for Disney's Fantasia 2000, but was quickly drawn into The Lion King as the films production designer. For The Lion King, he worked on the design sensibilities for sequences that were a departure from the films main style, including the I Just Can't Wait to Be King song sequence and Mufasas ghost.

For the 1998 Disney animated feature, Mulan, Sanders lent his talents as co-head of story and screenwriter. His work on that film earned him two Annie Awards in the storyboarding and screenwriting categories. For the next step in Sanders distinguished animation career as an artist, designer and story supervisor, Sanders made his directorial debut on Lilo & Stitch. Starting with his own, original idea, Sanders guided Lilo & Stitch through all stages of its creative journey from story sketch to the screen in his role as screenwriter/director (along with Dean DeBlois). Demonstrating yet another facet of his talent, Sanders also provided the voice of the mischievous title alien, Stitch.

After 20 successful and inspired years at Disney Animation, Sanders recently moved to Dreamworks Animation where he is currently directing his next animated feature film. An avid outdoor adventurer, Sanders resides in Los Angeles where he enjoys spending time with his daughter.