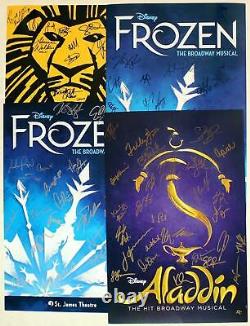 Disney Broadway Signed Poster Bundle - LION KING, ALADDIN, FROZEN (x2). We're celebrating Cyber Monday by showcasing the amazing shows of Disney on Broadway! Disney's Broadway productions have been amazing supporters of Broadway Cares & we are filled with love & gratitude. These special items will only be available until December16th.

If you have a Disney fan in your life, this would be a truly amazing gift! The first is a poster that has been signed by the cast from the beginning of.

The second is a poster that has been autographed by. Closing cast, including Elsa - Ciara Renée and Anna - McKenzie Kurtz. The replacement cast came into the show in February of 2020 and, unfortunately, had their time with the show cut short by the closure of Broadway in March 2020. Any items, especially posters, signed by the closing cast are extremely rare. Third is a cast signed poster from.

That includes signatures from Telly Leung , Areielle Jacobs , and Jonathan Freeman. Finally, there's a fantastic poster signed by the 2020 Broadway cast of. The posters have also been signed by many members of the Broadway casts, but I will only guarantee the signatures of Caissie, Patti, Ciara, McKenzie, Telly, Arielle, and Jonathan.

The posters may have varied signature placement and minor imperfections, but I will try to select posters that have as many signatures and as few flaws as possible. Thank you & Happy HoliBays! Broadway Cares/Equity Fights AIDS is one of the nation? S leading industry-based, nonprofit AIDS fundraising and grant-making organizations. Broadway Cares/Equity Fights AIDS is the major supporter of the social service programs at The Actors Fund, including the HIV/AIDS Initiative, the Phyllis Newman Women?