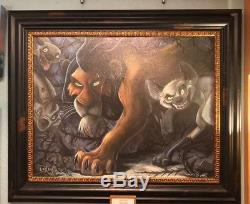 Brand new in box, all items are opened for inspection. Frame has a rustic/vintage look. # in series will vary.

The item "Disney Parks The Lion King Scar and Crew LE Framed Giclee by Darren Wilson New" is in sale since Thursday, February 22, 2018. This item is in the category "Collectibles\Disneyana\Contemporary (1968-Now)\Posters, Prints & Lithos".