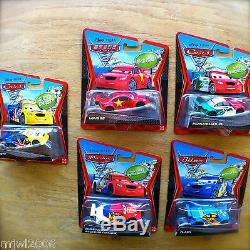 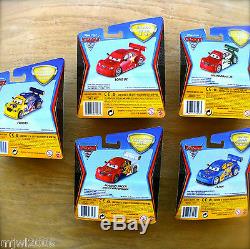 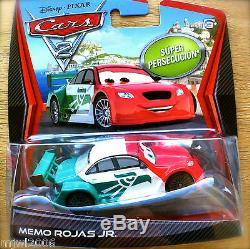 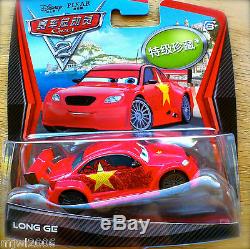 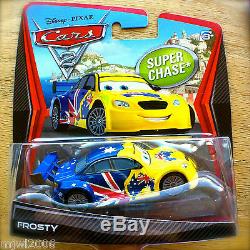 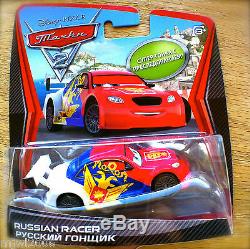 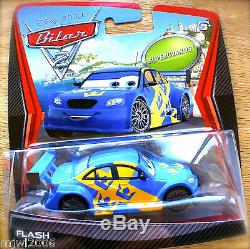 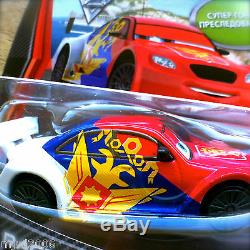 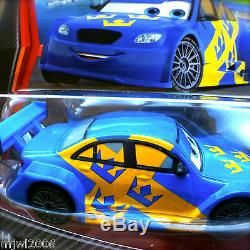 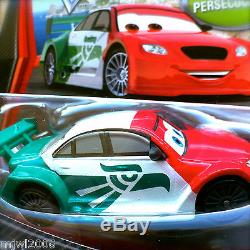 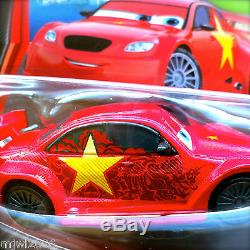 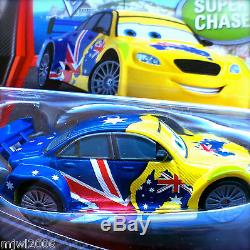 They swept the world by storm in the Summer of 2012 and if you waited for just the right moment to get your complete set of Disney PIXAR Cars 2 limited-production World Grand Prix SUPER CHASE racers, this might be it. Put your hands together and grab your wallet for Disney PIXAR Cars 2 FROSTY RUSSIAN MEMO ROJAS JR FLASH LONG GE lot 5 SUPER CHASE. As we all know, these SUPER CHASE racers replaced American racer Jeff Gorvette (based on real-life racer Jeff Gordon) in international versions of Cars 2 during that Tokyo party scene where Mater is about to embarrass the daylights out of old pal Lightning McQueen in front of Gorvette and fellow real-life Brit racer Lewis Hamilton. Unlike Jeff Gorvette, however, the SUPER CHASE characters are created on the same body type as German racer Max Schnell, who is based on real-life racer Sebastian Schnell. The SUPER CHASE racers included in this set are.

Chinese LONG GE (voice actor unknown; this character appeared in Mainland China versions of the film only). This Disney PIXAR Cars 2 FROSTY RUSSIAN MEMO ROJAS JR FLASH LONG GE lot 5 SUPER CHASE listing is for the complete BUNDLE set of five (5) World Grand Prix SUPER CHASE 1:55 scale diecast (with plastic component) racers on the now-retired Cars 2 Porto Corsa card by Mattel. These cards are in good condition, with details to follow. FROSTY: card is flat, corners intact with no curling or fraying. Blister shows very mild wear only. No wear from rubbing but one light scratch across the front, visible only when held to reflect the light.

No crinkles, cracks or creases in the blister. Inside the package, FROSTY looks exactly as he should except for one small flake in his decal near the bottom of the back door, not readily visible unless you're determined to find it. RUSSIAN RACER: card is flat, all corners intact, smooth outer edges. Blister is crystal clear across the front but shows minor rubbing along the top edge.

No cracks or crinkles in it. Inside the package, RUSSIAN RACER has a thin strand of lint sitting on his windshield, and two minuscule blue dots in the yellow portion of the decal along his side.

Card is warped slightly (less than1.5 mm) along the right-hand side. There are two half-circle impressions along the outer edge from how the card was diecut at the factory. Fold by the diecut j-hook when viewed in reverse. Faint ghostly outline from the pressure with which the blister was applied to the cardback. Little to no visible wear on the blister itself. No cracks, crinkles or creases. Inside the package, MEMO ROJAS JR.

I see no flaws other than that there appears to be a light layer of dust that has settled on his roof and along the side door. FLASH: card is flat, bottom right corner is ever-so-slightly frayed. Half-circle impression from diecut on the outer edge of the card mid-way on the right. Mild wear at the outer edge on the left. Blister shows mild wear at front and top with no crinkles or creases.

Inside the package, FLASH looks good. The only thing of note is that there are two small spots in the black window trim along his door that don't have full coverage. LONG GE: card is slightly warped (about 2 mm) toward the top left corner. Faint ghostly outline on the card surrounding the blister. Blister shows little to no wear.

Inside the package, LONG GE shows no flaws. This detailed description should not serve to discredit the individual pieces. It is to assure you that you are, in fact, receiving items that have been closely examined for all matters of relevance.

Please examine the supplied photos for more detail. As defined by Mattel, SUPER CHASE characters are limited in production numbers to a specific amount. For four of five of them, that amount is specified on the packaging as limited at 4,000 units. As per the packaging for the RUSSIAN RACER, it was limited at 2,000 units. Welcome to your Canadian Prairie pit stop for Disney PIXAR Cars!

McQueen and Mo Mater has the widest selection of Cars for online sale in Canada. We care for your Cars!

And thank you for choosing McQueen and Mo Mater. Note that Canada Post Corporation counts acceptance as Day Zero. You will be glad you did. Cash on Collection available by appointment only. IT IS YOUR DUTY TO PAY DUTY.

We source our merchandise from trusted, law-abiding collectors and suppliers dealing in legitimate, authorized products. McQueen and Mo Mater properly packages orders so that parcels arrive on doorsteps exactly how they left ours. And, finally, we communicate every step of the way so you always know exactly how long your order should take to arrive. McQueen and Mo Mater loves what we sell, we value our customers and stand behind our feedback. Considerable time and effort is invested into creating listings that work. Using Sell One Yourself from our listing? Please do not copy it word-for-word.

If you do not see what you want, please ask. We are always happy to discuss custom bundles for buyers.

The item "Disney PIXAR Cars 2 FROSTY RUSSIAN MEMO ROJAS JR FLASH LONG GE lot 5 SUPER CHASE" is in sale since Saturday, May 16, 2015. This item is in the category "Toys & Hobbies\TV & Movie Character Toys". The seller is "momcqueen" and is located in Winnipeg, Manitoba.