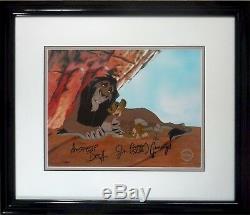 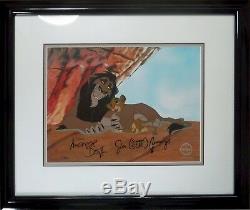 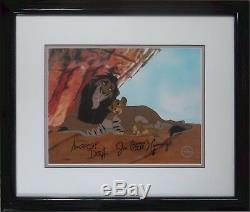 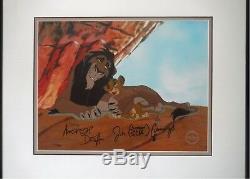 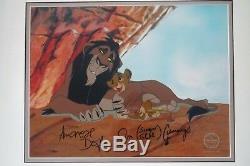 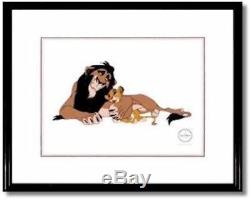 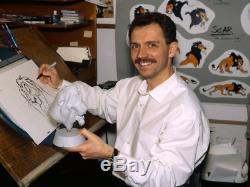 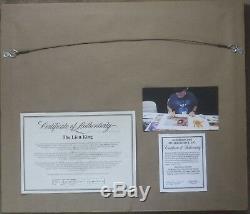 Disney's Scheming Scar Cel signed by Scar creator/animator. Andreas Deja and his voice Jim Cummings. Limited edition Sericel created and released by Disney in 1995. Image is comprised from original production work used in the creation of THE LION KING, from 1994. Great scene of Scar setting up his nephew to take the fall so, He can become the King.

This comes with 3 added BONUS'. It's been hand signed by Scar's creator Andreas Deja , and we have added this custom photographic background, FREE. Made exclusively for this piece. This background is not for sale separately.

BONUS-BONUS We also got this signed by the signing voice of Scar Jim Cummings. Jim also does the voice for the TV animation. This is what the piece looked like when original issued by Disney. We have painstakingly recreated the background from THIS scene in the movie.

And color, highlights and lighting adjustments, to make sure the Lions look good, even better than they did in the movie. Background is printed with a high quality Luster finish, which cuts down on glare. Background print is 11 x14 inches. Comes with the Official Disney Certificate of Authenticity. Edition size is 5000, and was original released by Disney unsigned and without a background.

Piece was simply framed over a white matt board background. Cel size is 11 x14 inches, frame size is 18 x 21 inches. One from Disney for the cel the second for the autograph. Also comes with a publicity photo of Andreas mounted on the back of the frame.

Finished off with brown dust-paper backing and a wire hanger. Frame is in Good condition with only slight blemishes. COA is mounted in the back. This piece is ready to hang out of the box!

BIO : Andreas Deja (born 1 April 1957) is a Polish-born German-American character animator, most noted for his work at Walt Disney Animation Studios. Deja's work includes serving as supervising animator on characters in several Disney animated films, including the Disney villains Gaston from Beauty and the Beast, Jafar from Aladdin, Scar from The Lion King and the hero Hercules from Hercules. (born November 3, 1952) is an American voice actor and singer, who has appeared in almost 400 roles.

He is known for voicing the title character from Darkwing Duck, Dr. Robotnik from Sonic the Hedgehog, Pete, Winnie the Pooh, Tigger, Bonkers D.

He has performed in numerous Disney and DreamWorks animations including Aladdin, The Lion King, Balto, Antz, The Road to El Dorado, Shrek, and The Princess and the Frog. He has also provided voice-over work for video games, such as Icewind Dale, Fallout, The Elder Scrolls V: Skyrim, Baldur's Gate, Mass Effect 2, Star Wars: The Old Republic, World of Warcraft: Mists of Pandaria, World of Warcraft: Legion, and Splatterhouse other voice characters voiced as Biker Mice from Mars, Iron Man, Spider-Man: The Animated Series, Teenage Mutant Ninja Turtles, The Incredible Hulk, Batman: The Animated Series and Fantastic Four. He has been the voice of Pooh since 1988. Including the latest "Christopher Robin" live action movie.

The item "Disney Lion King Cel Scheming Scar Simba Hand signed by Andreas Deja Sericel" is in sale since Friday, January 18, 2019. This item is in the category "Collectibles\Animation Art & Characters\Animation Art\Sericels". The seller is "toon-city" and is located in San Diego, California. This item can be shipped worldwide.